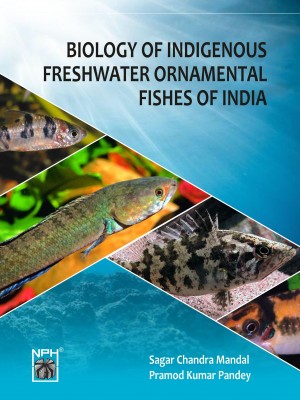 The beautiful and vibrant characters of ornamental fishes attract people towards the living
aquatic jewels. About ninety per cent of the ornamental fishes, exported from India, comprise of
freshwater fish species which are caught from wild region of NE India. Their judicious
collection, captive farming, artificial mass production and their trade have not been done
optimally to the possible level. India is having vast freshwater aquatic resources that have great
potentialities for the development and promotion of ornamental fish farming. The detailed
knowledge on biology of indigenous freshwater ornamental fishes such as identification,
characterization, general biology, breeding, food and feeding habit, etc. is of paramount
importance to fill up the deficiency existing in terms of academic knowledge and
entrepreneurship development. How fast they grow, how often they reproduce, what is their
optimum size and age at which they breed and what they prey upon, are required to be
understood for the development of successful entrepreneurship.
This book gives detail information on identifying characters, colours, basic biology,
breeding and feeding biology of the important freshwater indigenous ornamental fishes of India.
The book describes a total of 152 fish species under 8 orders, 27 families. Maximum fish species
are from Cyprinidae family (52 species), followed by Nemacheilidae (13 species), Sisoridae (13
species), Bagridae (11 species), Erethistidae (9 species), Cobitidae (8 species) and so on. This
book will serve as a guide for students, teachers, scientists, research scholars, traders and
entrepreneurs in understanding overall biology of indigenous ornamental freshwater fishes.